WITHOUT fail, western apologists for Islam never disappoint, that is, when it comes to supporting the most heinous actions of Mohammedans. On cue.

EVEN so, when weighed against the submission of the leadership of the free world, little is more indicative of the engulfing madness. Amply demonstrated by the two-term prostration of HUSSEIN Obama via an endless line of surrogates, know that words fail – and this is no small admission!

BE that as it may, countless traitors continue to play a role in tearing apart the bulwark (one of two, Israel being the other) of western civilization, America, whether from inside or outside Washington’s corridors. In fact, the damage accrued from media mouthpieces, academic back-benchers, and assorted self-appointed elites is incalculable. The magnitude of varying multi-pronged knock-on effects have yet to be fully understood, exposed, or even admitted to. Regardless, rest assured, future generations will be very unforgiving of those who stood on the sidelines, never mind toward the actual perpetrators. Damn them all to hell.

TRUST, what is known has weakened American (western) interests for many decades to come. Indeed, the entire free world. In reality, as it stands, book after book can be filled with one catastrophe after another. Still, if one sticks to the “exploits” and rise of ISIS, what emerges is a most grave, albeit preliminary, damage assessment. This is atop an endless list of hydra-rooted Brotherhood terror groups – as they operated with impunity under the “watchful” eyes of the Islamist-in-Chief. Egregiously, they are still going from strength to strength under the current administration.

MIND you, President Trump has the ability to stop them in their tracks, thus, mitigating future damages. However, that would take the passage of Congressional S.68 – Muslim Brotherhood Terrorist Designation Act of 2017 115th Congress (2017-2018) for the domestic threat level to diminish. Not only that, this nation-saving bill has been in Congress’s hands since 2015, languishing, awaiting its fate via S.2230 – Muslim Brotherhood Terrorist Designation Act. Hence, the two-prong question becomes: What is Congress waiting for? And, why isn’t Trump pushing it forward – tweeking reps into action ala tweets and various hardball measures? Fair questions.

DESPITE the above (and before the nexus between Christianity’s erasure from the Mid East; Trudeau’s – others alike – payoff to terrorists, and “spilled beans” can be connected) it is mandatory due diligence to loosely outline the rise of ISIS. This is necessary, but only because of ISIS’s front-line status. In other words, the fact of the matter is that one can insert a myriad of countless Islamic groups in its stead, still yet, the end result will be the same – the destruction of western civilization. Regardless, it is always the “superstar” who grabs top billing.

SIX of one….half a dozen of another.

ALL of which links up the erasure of Christianity in the Middle East with actual payments to Islamic terrorist killers by western leaders, and the concomitant spilled beans by so-called migrants and refugees. In the meanwhile, a “subtle” campaign inside the US is uprooting the nation’s Judeo-Christian underpinnings – sans the actual application of lethal weaponry, at this juncture. On fire. There is continuous collusion, aka heavy-lifting, between Islamists and the fascist-left.

SIMPLY put, once leaders of the free world act as apologists for Islam (a religious/political Sharia Law based doctrine, which seeks nothing less than the subjugation and/or slaughter of non-Muslims, apostates alike), why in heaven’s name shouldn’t Mohammedans erase Christianity from the Mid East, its cradle, and throughout the west alike? Indeed.

To hear some of Israel’s antagonists speak one would think the Jewish state was hostile toward Christians.

Why then has a Christian leader dedicated to serving the Arab world sought shelter in Israel after having a price put on his head by ISIS?

Could it be that he, unlike Israel’s detractors, knows that the Jews and their army (called by many an “occupation force”) are a bulwark against the rising tide of Islam, and therefore a haven for Christians?

Canon Andrew White, dubbed the “Vicar of Baghdad,” spent years serving the Christians of Iraq, even under direct threat from radical Muslim groups.

But his outspokenness regarding the atrocities faced by Iraq’s Christians eventually earned White a spot at the top of ISIS’s “most wanted” list, and that’s when his superiors in the Church of England ordered him to get out.

“ISIS were threatening to kill me, they were after me,” White said in an interview with CBN. “They wanted that priest from England. So, the Archbishop of Canterbury said, ‘You’ve got to leave now.’ I can’t argue with the Archbishop of Canterbury, especially as he used to be my colleague.  We used to work together. So, I’m in Israel now. He wanted me to get out of Baghdad.”

TELLINGLY, once again, Israel came to the rescue. So, as the “vicar of Baghdad” fled Allah’s Muslim Terrorists, he headed straight into the shelter of Israel’s arms. Meanwhile, Mohammedans continue to slaughter Christians, Jews, and every minority in between – and western leaders pay them off!! 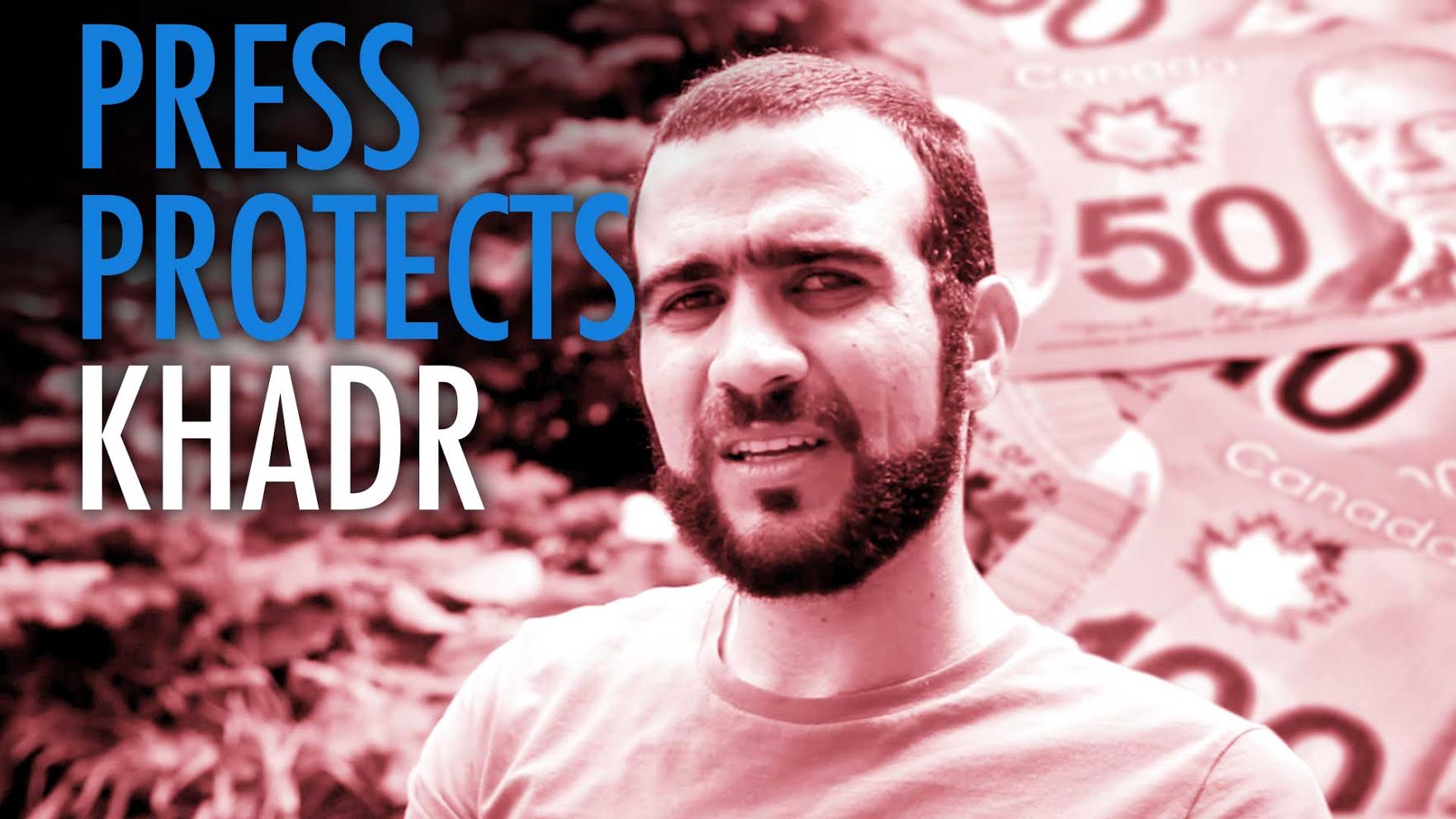 A Special Forces soldier blinded in attack by a Guantanamo detainee who was given millions by the Canadian government says Justin Trudeau is guilty of treason.

Layne Morris, was injured and another soldier was killed when a 15-year-old Omar Khadr in a firefight with US Marines in Afghanistan in 2002.

He was captured, and the teen spent the next ten years in Guantanamo Bay where he was tortured and interrogated.

Now Khadr, 30, who has since returned to Canada, has won $8 million ($10.5 million CAD) from the Canadian government after winning his wrongful imprisonment suit for the abuse he sustained while in prison.

But Morris, who was blinded in one eye by the attack, said the news felt, ‘Like a punch in the face,’ Toronto Sun reported.

Layne Morris, a Special Forces soldier blinded in attack by a Guantanamo detainee (left) who was given millions by the Canadian government says Justin Trudeau (right) is guilty of treason

‘We didn’t understand the deal but we didn’t think that the government would do a behind-the-scenes move like that.

‘I don’t see this as anything but treason,’ added Morris. ‘It’s something a traitor would do. As far as I am concerned, Prime Minister Trudeau should be charged.’

Morris, a 55-year-old special forces sergeant, said it felt like the Canadian government made a ‘dirty deal’ with the cash settlement to avoid being exposed to an American court.

His wife Leisl said that Khadr’s transportation from Guantanamo to Canada in September 2012 was ‘just as secretive.’

‘President Obama moved him in the middle of the night back to Canada and nobody even knew. He sure gets special treatment,’ she said.

The Special Forces soldier said he doesn’t understand why the government would pay out to ‘the enemy’ – even if they were tortured as a minor in Guantanamo Bay.

‘You don’t ever do anything to aid and abet the enemy,’ Morris said. ‘We were fighting the terrorists. They were the bad guys. Something is really off here.’

He even warned that the compensation could end up back in the hands of terrorists as he warned Khadr’s father was a chief fundraiser for Osama Bin Laden.

‘As a general rule… you keep money out of the hands of people who build bombs or would throw hand grenades at our soldiers,’ said Morris.

Khadr’s military trial drew criticism because he was captured at age 15 and seriously wounded during a four-hour battle at an Afghanistan al-Qaida compound in 2002. Khadr’s lawyers and human rights groups contended he was groomed to be ‘child soldier’ and should have been sent home for rehabilitation.

They said Speer died in a battlefield killing that did not amount to a war crime.

Khadr was prohibited under the deal from calling witnesses at his sentencing hearing who would support defense claims that he was a ‘child soldier,’ forced into fighting the U.S. by a radical father who was an associate of Osama bin Laden….continue reading the whole (western) madness….actually, treason, here….

IN this regard, is it any wonder that the following is the case, and, hardly a lone one at that? You decide.

In no uncertain terms – from this professional counter-jihad perch – this in-your-face African Muslim is telling it like it is. Yes, the west has lost its bearings, as well as its backbone. Effectively, the leadership lack balls!! What better descriptor is there, crass as it is? Not only that, non-Muslim citizens truly believe that law enforcement will save the day. In a pig’s eye.

IN any case, attesting to the dire straits at hand, a security officer in Sweden lost his job and faces possible prosecution for…..guess what…..stopping the attempted rape of a Christian woman!!

AND, in a never-ending cycle of western madness, the BBC stated that the Holocaust is a “sensitive” subject for Muslims, ipso facto, they will avoid talking about it!!

IN a nutshell, many well-meaning folks are hard-pressed to internalize a central truth: be it a hatred of western values, financial greed, a combination thereof, or out of plain cowardice, countless leaders (and others) are more than willing to collude with the enemy – whether inside the nation or beyond its borders. Consequentially, it is especially dangerous when America’s leaders resort to such treachery, in as much as whither the nation goes, so too does western civilization. Simple as that.

MOST significantly, the likes of Choudary (by the way, an Islamist that yours truly has intersected with via this and that security analysis…..“Israel-based intelligence analyst Adina Kutnicki said the concern over ISIS is well founded. However, Kutnicki told WND in an interview that the jihadists’ point of origin should not be the focus….”) must be applauded, at least in terms of his brutal honesty. Props for that.

EFFECTIVELY, whereas enumerable Islamists employ Koranic mandated dissimulation derived from “weaponized” taqiyya, tawriya, kitman, and muruna, the fact remains that there are others who tell it like it is. That is that.

IF anything, patriots should know by now that the enemy within includes: a growing list of Mohammedans, an entrenched fascist-left, a volume of western leaders, and a host of foot soldiers. They are, in one way or another, gunning to bring down America. Therefore, it is imperative to block out their chatter, jibber-jabber, and all their distractions meant to deflect and confuse. Instead, concentrate on turning the tables.

ON the other hand, those who wish to save the nation from their clutches would be well-advised to also listen to enemies who issue truths, painful as they are – including, Choudhary, a jacked-up jihadi whose operational base is in Britain.

NOT only that, aside from Choudhary, there are others who are inclined to get to the crux – one of whom was cited at “ISIS, Islam And Obama: Understanding The Threat To The Free World”, a global interview with this investigative journalist. Its excerpt reads:

The viewpoint of ISIS echos throughout the Islamic world. Mawlana Abul Ala Mawdudi, founder of Pakistan’s Islamic Fundamentalist Movement, which boasts hundreds of thousands of members, spoke openly and honestly about the religion of Islam.

DISMISS their words, warnings, at your own peril!!