The 2020 Elections saw more foreign influence than you think. One foreign actor in specific was Communist China. They went to great lengths to be active in this political arena by “seeding the vote,” a program designed to press US Communist groups into action to get rid of Trump by rallying marginal voters to cast a ballot against him. There are about 600 groups directly tied to Chinese communists in this country, according to Newsweek.

The Communist Party, Freedom Road, Liberation Road, etc. are just a few of the 600 groups with ties directly to Communist China. And they are open about those ties in their flyers and internal documents, according to Trevor Louden, documentary Filmmaker, author, and someone who has followed these Communist/Socialist groups for 30 years. The Chinese also worked hard in the pandemic to propagandize the idea of lockdowns, which ultimately caused the mass mail-in ballot issues.

Is China attempting to “destroy” the US? No, it wants to change and subvert it from within. And they WANT to control the people.

“The scope of alleged activities is enormous, involving social and business gatherings, extensive information campaigns and building political and economic ties that can be leveraged to Beijing’s gain — recent reports of Hunter Biden’s business dealings with a Chinese energy company eager to connect with his father and President Trump’s secret Chinese bank account are just the latest high-profile examples that some China watchers find worrisome. There are also accusations of large-scale economic espionage.” Newsweek’s Didi Kirsten Tatlow

The following videos via Trevor Louden explain just a few of the many groups that were active in this election cycle. Keep in mind that ANY foreign influence in our elections is illegal. Seeding The Vote is about building the strength and influence of these groups.  And they have bragged about flipping red states in this election.

In this interview on The Epoch Times “Crossroad” with Joshua Philipp, Trevor Louden reminds us all what was at stake in the 2020 election: the loss of freedom.

When you add all of the ways that these foreign actors can sway votes, the list is endless. Not only do Communist groups in the US play a huge part, but Twitter and Facebook also provide propaganda havens.

The accounts, often involving bots or fake IDs, on those social media giants are engaging in “cross-platform inauthentic activity, conducted by Chinese-speaking actors and broadly in alignment with the political goal of the People’s Republic of China to denigrate the standing of the U.S.,” the institute’s report concluded.

When the CEOs of Social Media are also in favor of China, you have the perfect storm: their censorship policies and algorithms deliberately swayed people away from truth toward the lie in this election. Their excuse was that patriotic Americans were the “inauthentic behavior” they  suppressed as “election interference”… while the real election interference continued on their platforms unabated. In reality they were wrong, but their left leaning beliefs have created a Communist monster of major proportions. Censorship is the opiate of Big Tech. Power and control over the masses is very heady for these fools.

China’s foreign influence was rife with US collaborators. 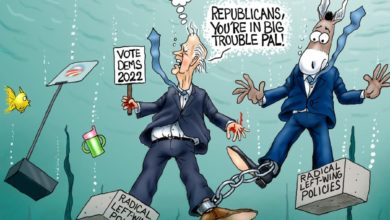