On Saturday night, Chicago police confronted a man with a “bulge around his waistband” in the South Shore neighborhood at around 5:30 p.m. After clashing with officers and attempting to flee, a female police officer fatally shot him, according to Blue Lives Matter and Fox. Within two minutes a crowd surrounded the officers and began threatening them. There appeared to be some white anarchists in the crowd. 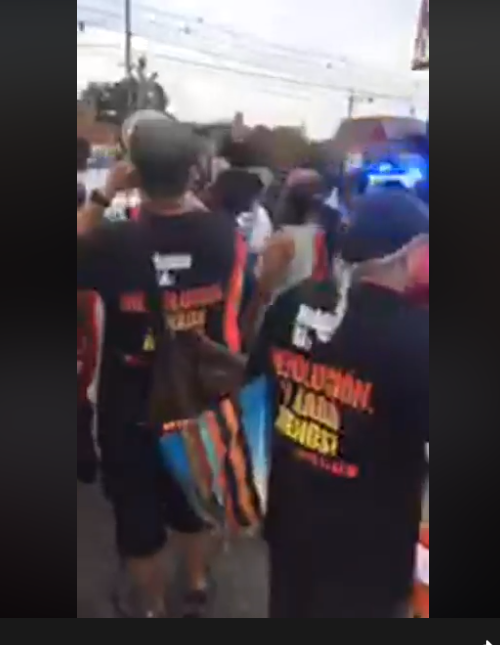 Large numbers of police arrived and formed a line against the protesters. They put up a fence between themselves and the people. The crowds and the police clashed, with protesters throwing rocks and bottles, and the police hit protesters with batons. Police made numerous arrests during the melee.

The deceased man’s name was “Tommy” and was reportedly a barber who went by “Snoop.” He had a 5 year old daughter.  The narrative being shared in the crowd said he was “unarmed and shot in the back” or that it was ok for him to be armed because he “had a permit.”  But he did not have a concealed weapons permit, and had other magazines for the semi-automatic weapon in his waistband.

Here’s how it went down:

UPDATE: Officers assigned to a foot assignment observe a man exhibiting characteristics of an armed person. Officers go to question him when a confrontation ensues and he is shot. The man was fatally wounded. A weapon recovered on scene. pic.twitter.com/8CJXu8m5pa

The female officer who shot him was immediately placed in a police car and driven from the scene. That didn’t stop the “protesters,” one of whom started jumping on a patrol car.

Witnesses say the female officer who fired the shots was immediately put in a squad car and taken away from the scene. By my count, there are between 80-100 officers at the scene right now. Probably as many or more protestors. pic.twitter.com/Q56GnfaJiW

When police moved their line forward, it became even more tense. But it’s the white guy with the bullhorn in the center of the angry black crowd that is the most interesting. He was shouting that we “need a revolution.”

The crowd appeared within two minutes after the shooting, according to reporter Nader Issa from the Chicago Sun Times.

Here is another view of the white guy with the megaphone shouting for the crowd to take down the “whole damned system,” and shouting anti-Trump slogans. Let’s ask the black community, who do they listen to?  Who are they serving by their riots and protests?

The crowd just finished chanting “Who do you serve? Who do you protect?”

The crowd formed within two minutes after the shooting, witnesses say. pic.twitter.com/GEvOEZQ2St

Three or four officers were reportedly hurt from the rocks and bottles thrown at them, according to Blue Lives Matter.

If you look at the crowd pictures, you find that most of the folks are just there to watch. A handful of them are actively involved in the clashes, but white guy inciting the crowd to riot is the one who needs to be arrested. His shirt says something about a “Revolution,” as does the shirt of his white buddy standing beside him. These are the Communist anarchists who are using the black community to foment unrest. 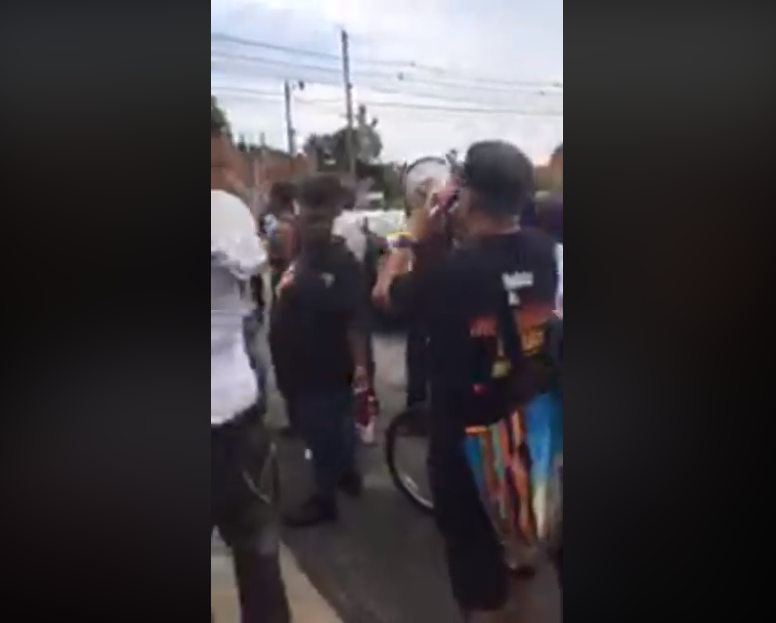