Get ready for a BIG push to end your Second Amendment right to bear arms under the guise of “public health.”

It’s incredibly annoying how people who want to talk about the “problem” of guns don’t seem to have a clue about guns or gun owners.

The CDC has been stepping into all sorts of territory to push a leftwing agenda on Americans… for their own good.

For more than a decade, the CDC has done this with “climate change” — which opens the door to pushing the Green New Deal for “public health” reasons. The agency is even using far-left buzzwords and phrases like “climate justice” and “health equity” embedding considerations on how different races are impacted into their agenda.

This is all consistent with the Biden-Harris administration’s Day 1 Executive Order to “tackle the climate crisis” framing it as a public health issue.

During the pandemic, the CDC made an unbelievable reach on banning evictions before they had their knuckles rapped by the Supreme Court.

To the CDC, personal freedoms don’t matter a damned if they can grow the blob of government and dictate how you live your life.

Now that the Director of the Center for Disease Control has tasted the unlimited power of government control, she seems loathe to give it up.

The government agency now wants to show the American public that it can walk and chew gum at the same time by taking on yet another “public health emergency” — guns.

And they’re planning on taking action.

NEW – CDC implements study on "gun violence" after labeling it a "public health threat," aiming to "craft swift interventions, as they have done to contain the coronavirus pandemic and other national health emergencies." (NPR)

When Biden edged out Bernie in the primary making backroom deals with the other candidates, he said that he wanted to put gun-grabbing Beto in charge of examining the issue of gun control, which was already a part of his platform.

In April, Biden said that the U.S. is facing “a gun violence public health epidemic.”

The pandemic has taken center stage for more than a year and a half, but as vaccines are widespread and the federal government is encouraging private businesses and local governments to institute vaccine mandates, the CDC clearly has some extra time on its hands. It’s not like there should be a focus on treatments for COVID or research into natural immunity or anything… Or perhaps the flood of unknown diseases also coming into the country along with the flood of migrants surging at the border… Nah. Why do that when you can tackle the “epidemic” of gun violence?

CNN interviewed Walensky in August about the CDC’s new focus on guns.

Walensky said, “Every day we turn on the news and there are more young people are dying. I swore to the President and to this country that I would protect your health. This is clearly one of those moments — one of those issues that is harming America’s health.”

“Something has to be done about this,” Walensky told CNN. “Now is the time. It’s pedal-to-the-metal time. We haven’t spent the time, energy, and frankly, the resources to understand this problem because it’s been so divided.”

Can’t wait for Walensky’s take on broken homes, single mothers, and fatherlessness as a “root cause” of gang membership as well as certain ethnic communities that romanticize and normalize gangs.

She’ll also no doubt touch on the related wide-open southern border welcoming in MS-13 and drug cartels fueling drug use and gun crime all over the country, right?

After all, that’s what most of the “gun violence” problem in America is.

“Generally, the word gun, for those who are worried about research in this area, is followed by the word control, and that’s not what I want to do here,” she added. “I’m not here about gun control. I’m here about preventing gun violence and gun death.”

She said she doesn’t want people to think she is trying to take away their guns.

She invited gun owners to be part of the solution.

After the heavy-handed approach with the pandemic — masks, lockdowns, vaccines, mandates, and now boosters… do you believe her?

The issue is gaining attention now after a recent NPR piece that focused on victims of gun violence.

Walensky says that she wants the CDC to research the “scope of the problem.”

Back in the 90s, the CDC did research guns and buried the results that show that defensive gun use incidents outnumbered the offensive uses.

Dear CNN: The CDC Conducted A Study About Defensive vs Offensive Gun Use – We Dare You To Report On It

The CDC announced it will be spending more than $2.2 million to “provide surveillance data in near-real time on emergency visits for nonfatal firearm injuries.” The data collected will include the overall visits and the intent — intentional self-directed, unintentional, and assault-related to better allow state and local jurisdictions in “identifying and responding to emerging public health problems.”

The CDC is going to keep declaring things “public health” emergencies to exert more and more control and the left will cheer it on.

Maybe someone over there should read a bit more C.S. Lewis.

“Of all tyrannies, a tyranny sincerely exercised for the good of its victims may be the most oppressive. It would be better to live under robber barons than under omnipotent moral busybodies. The robber baron’s cruelty may sometimes sleep, his cupidity may at some point be satiated; but those who torment us for our own good will torment us without end for they do so with the approval of their own conscience. They may be more likely to go to Heaven yet at the same time likelier to make a Hell of earth. This very kindness stings with intolerable insult. To be “cured” against one’s will and cured of states which we may not regard as disease is to be put on a level of those who have not yet reached the age of reason or those who never will; to be classed with infants, imbeciles, and domestic animals.”
— C.S. Lewis, God in the Dock: Essays on Theology (Making of Modern Theology) 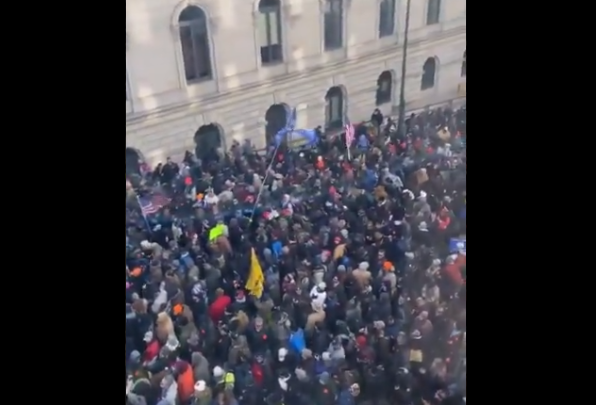