Scratch a liberal, find a fascist hatemonger.  On Thursday, Mark Elyas, president of the Liberal Party’s Vancouver constituency association, called supporters of President Donald Trump “subhuman pieces of sh*t” on Facebook, further stating they should be sent to detention camps after having their children taken from them, the Daily Caller reported Saturday.

According to David Krayden, the Daily Caller’s Ottowa Bureau Chief:

The post is entitled “Mr. President, F**k You!” It was apparently issued in response to the ongoing controversy surrounding the separation of child migrants from their parents in the U.S.

“Trump is a bigot, homophobe, racist, and misogynist. He can go f— himself,” Elyas rants, before asking a responder, “Why are you on (my) personal page? We aren’t even friends. In fact, you can f**k yourself, too, you racist Trump supporter.”

Dozens of people responded to his public post, suggesting someone representing a Canadian political party shouldn’t be using such profane language over social media or making such extreme statements.

Elyas dismissed criticism of his post as being “typical for all Trump supporters.”

The hate-filled screed has since been removed from Facebook, the Daily Caller said, but not before being captured for posterity by the Toronto Sun: 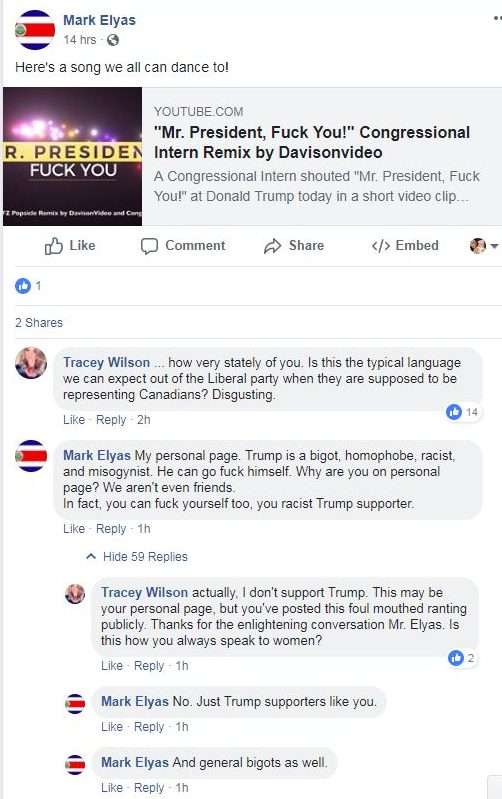 In another post, he admitted being a bigot, adding: “I exclusively discriminate against Trump supporters. They are subhuman pieces of sh*t, and are exactly what’s wrong with the world.”  He further said that all those who support the president “need to be rounded up and placed in camps away from public view,” while “Their kids should be taken away from them for child abuse.”

By Thursday evening, Elyas posted a statement on the Vancouver East Liberals’ official Facebook page, defending his post and continuing his diatribe against the president and his supporters.

“I will put it out there: I hate Donald Trump and everything he and his supporters represent; mainly white supremacy; racism; misogyny; xenophobia; homophobia; and fascism,” he wrote, adding he refuses to resign from his position with the Liberal party.

A little over an hour later, the post disappeared from the page.

That was followed soon after by a post on Elyas’ personal Facebook page featuring a drawing of a completely nude Trump baring his genitals.

Nudity, by the way, violates Facebook’s community standards, and many have been banned from the site for far less.

The Toronto Sun tells us that Elyas has a long history of this kind of unhinge hatred:

Shortly after Donald Trump’s Nov. 9, 2016 victory in the United States presidential election, Elyas commenced a campaign of profane and scatalogical insults on Twitter — calling the 45th president “retarded,” accusing him of being a pedophile, urging Trump to commit suicide, and writing he hopes the president “chokes on his food and dies.”

As I’ve said repeatedly since 2011, liberalism, at its core, is an ideology of insane, bloodthirsty rage and hate.  Radical leftists like Elyas prove that assertion correct on just about any given day.