REPORTEDLY, the Wahabbi Kingdom’s youthful face, 34-year-old Mohammed bin Salman (a.k.a. MBS….ain’t that a sweet and cheeky moniker), leads a wildly lavish lifestyle akin to the excesses of western movers and shakers from the highest economic strata – never mind the so-called piety and austerity mandated by Wahabbi Islam!

AS it happens, it is along the same trajectory of cognitive dissonance that western politicians and elitists attempt to persuade the public that the fresh-faced leader of the House of Saud is no longer mired in the bloody history of the doctrine of ‘pure Islam’, adopted in 1744 by the Kingdom. Par for the course, the spin goes along this crooked line: after all, MBS lives like the rich and famous – albeit, in flowing garb – so he is one of us! (For the record, Qatar is its doctrinal twin, wedded to Wahabbism, too).

REGARDLESS, aside from its tabloid fodder aspect, why in heaven’s name should westerners give a damn about any of this, most especially, Americans? Well, let’s take a quick glimpse into Wahabbism’s current thrust and sway throughout the west. Only then, will its dangerous circle-back to the U.S., so to speak, be squared – CAIR-like!

A year ago, Vice-Chancellor Sigmar Gabriel of Germany rebuked Saudi Arabia for financing Wahhabi mosques worldwide. In the case of Germany, he added, such mosques had fostered extremists who threatened public security. That campaign by Saudi Arabia as well as other nations or organizations in the Gulf has been fueled by oil-wealth and has taken strategic advantage of Saudi control of the holy sites in Mecca and Medina. And it has been carried out by states that rely on the military, security, and economic ties with the United States and by other Western nations.

Is Wahhabist ideology a problem, and if so, for whom? The answer is yes, it is a problem; and it is a problem not only for those concerned with public safety in Germany or other Western nations, but for just about everyone except those preaching it.

The questions that Gabriel and other critics of Wahhabist ideology do not address are these. What is Wahhabism? What makes a particular mosque, teaching circle, set of books, treatises, audio-cassettes, or Internet site Wahhabist? And given that there are few if any self-identified “Wahhabis”, how might one distinguish Wahhabism from Salafism more widely?

“Wahhabism” refers first and foremost to the teachings of the 18th-century Arabian preacher and activist, Muhammad ibn Abd al-Wahhab, who in 1744 made a pact with a local chief from the Saud tribe. This pact set the model for subsequent Saudi-Wahhabi rule: the clerics—Ibn Abd al-Wahhab and his successors—would decide what was proper Islam and the rulers— Muhammad ibn Saud and his descendants—would enforce the cleric’s interpretation of Islam, control territory, administer the state, and eliminate improper beliefs and practices.

Ibn Abd al-Wahhab preached a radical understanding of Takfir, that is, the declaration that certain beliefs or practices are apostasy. He taught that the vast majority of Muslims living in his time were in fact apostates, as had been the majority of Muslims since the eighth century. It is not enough for Muslims to carry out the daily prayers, fast during Ramadan, give alms, attempt to make the pilgrimage to Mecca, and affirm that “there is no god but God.” To avoid the charge of idolatrous polytheism, he taught, they must also renounce all beliefs and practices that negate, implicitly or explicitly, the oneness of God. Apostates who do not repent are to be executed. Whoever doubts that that the beliefs and practices condemned by Ibn Abd al-Wahhab are apostasy is himself an apostate. Whoever hesitates to support the appropriate punishment for the apostate is himself an apostate.

AS promised, the above – and what follows – beats a straight and direct path back to approximately 90 percent of the mosques across America. Indeed, this is not an exaggeration, nor up for debate. Fact-based.

PER Dave Gaubatz, the ‘expert among experts’ in the counter-terrorism/counter-intelligence/investigative arena, the following evidentiary trails are bullet-proof: “EXCLUSIVE REPORT: Saudi Jihad At Pensacola’s Naval Air Station, As Examined By A World-Class Counter-Terrorism & Counter-Intelligence Expert – Truths & Proofs.” Yes, let it be stated for the record: by internalizing the facts within this affixed sworn affidavit via an exclusive intelligence report, it will be impossible to veer away from the absolute dangers posed by mosques, a cancerous scourge, across America, and, by extension, the west in toto. In reality, they are actual safe-houses for jihad, ironically, protected by the First Amendment of the U.S. Constitution! (More on this explosive issue at a soon-to-be launched site, “America’s Civil War Rising”, ACWR!)

ACCORDINGLY, Liberato.US has this to add:

NOW that that is established and settled, let’s be crystal clear: CAIR, the Brotherhood Mafia’s propaganda arm in America (Canada, too), is the main facilitator and purveyor for Saudi Arabia’s (Pakistan is a supplier, too….but let’s not digress) takeover of U.S. mosques. CAIR’s jihadis comprise an endless hydra-like pyramid of foot soldiers via a stealthy campaign of infiltration and penetration.

STILL yet, before we get to the ‘dropped docs’, the following foretaste can be found within the ‘exclusive report’ cited above:
…..It is public record that CAIR has close ties to Islamic terrorist organizations such as Hamas and Al Qaeda. As a former Federal Agent, I found it astonishing but not surprising the fact that America’s law enforcement at state, county, city, and federal levels were identifying with a known Islamic organization such as CAIR that practices hate crimes against America and Americans on a daily basis.
During my 6-month first-hand research in 2008 (for further evidence obtained toward CAIR, refer to my book published in 2009, titled “Muslim Mafia“), in which I placed 5 of my researchers inside CAIR national, Washington DC, it was revealed CAIR has material in their office calling for support for Al Qaeda, child marriages, the killing of innocent Christians and Jews, slavery, treason and sedition against America, and the hatred and belief toward Israel that this country should be wiped off the face of the earth. In addition, CAIR receives and distributes thousands of books from Saudi Arabia by convicted Muslim terrorists such as Ali Al Timimi. One such book is “ A Brief Illustrated Guide to Understanding Islam”. Not only does CAIR place these books inside American mosques, but also in our public libraries and schools. Research in MN determined this book is in the St. Cloud public library. This particular book is very colorful and appears innocent, but the objective of Saudi Arabia and CAIR is for this book to be read by America’s youth. They are then encouraged to read other books and lectures by the authors and editors of this book, which leads to more and more violent and hate filled ideology. This book is used by CAIR to slowly and methodically groom the minds of youth so they will eventually accept Islam and fight in Jihad the enemies of Islam.In 2009, the FBI was directed to cut off all liaison with CAIR because of their ties to Islamic based terrorist groups, but it continues to this day.

TO wit, as always, this investigative journalist (and acknowledged Muslim Brotherhood expert) leaves no (jihadi) stone unturned. Alas, the following INTERNAL docs are now available for public viewing – CAIR’s (expected) howling and denials be damned.  Mind you, the fact that both ‘memos’ were written less than two years after Saudi-tied Al-Qaeda terrorists perpetrated the largest terror attack on U.S. soil, well, that’s more than instructive and noteworthy. Newsworthy.

In the Name of Allah, the Compassionate, the Merciful

The Royal Embassy of Saudi Arabia

All Praises are due to Allah, May His salaam and Blessings be on his Prophet Muhammad (PBUH) and his household, companions and all the righteous people of all times. May we all be among them.

On behalf of CAIR I would like to request the following:

We have a Dawah Program next week and if we can get part of item # 1 “Understanding Islam and Muslims” 300 copies by Friday it will be much appreciated. Kindly advise me the time and location and Insha Allah I will arrange for the pickup.

Brother Nihad Awad, Brother Omar Ahmad and all the brothers and sisters from CAIR send their Salaam and regards to every one at the Embassy.

Your Brother In Islam

INCONTESTABLY, the aforementioned is prima facie evidence re CAIR + Saudi Arabia = the supplier of U.S. mosques (other venues, too) with Wahhabi-infused jihadi materials! It began decades ago, and it is ongoing. No end in sight.

BUT there’s more fuel and fire to the ‘dumped docs’…..patience, dear reader.

HOW coincidental is it that CAIR (as cited within the above sworn affidavit to ATTACHMENT A, Page 5, and revealed as an unindicted co-conspirator to the largest terrorism trial in U.S. history, the Holy Land Foundation For Relief and Development, “HLF”) is inextricably tied into another ! unindicted co-conspirator, Imam Siraj Wahhaj? In a pig’s eye. As such, read on, but hang tight for the second ‘dumped doc.’

An unindicted co-conspirator in the 1993 World Trade Center bombing is a featured speaker at the “Stand With the Prophet in Honor and Respect” conference this weekend in Garland, Texas.

Muslim leaders plan to gather Saturday at Garland’s Curtis Culwell Center for the conference hosted by the group Sound Vision. The event is being billed as a “movement to defend Prophet Muhammad, his person, and his message,” according to event information, the Washington Free Beacon reported.

“Prophet Muhammad inspires love and devotion in the hearts of Muslims, peace be upon him; unfortunately, Islamophobes have turned him into an object of hate,” the conference website says. “In the name of Allah, the Beneficent the Merciful-

Each generation, there are born those leaders whose dedication and wisdom greatly benefit all those who come into contact with them. As one of the leading religious and social leaders of Muslims in America today, Imam Siraj Wahhaj has dedicated his life to the betterment of humanity.

Whether it is ridding the streets of drugs in his native Brooklyn or being the first person to offer a Muslim invocation for a session of Congress, Imam Siraj has been one of the chief architects in building bridges of understanding between Muslims and our fellow Americans.

On behalf of the Council on American-Islamic Relations and its entire staff, we offer our most sincere gratitude for all of Imam Siraj’s dedication and commitment to Muslims in America.”

CAIR, what say you?? WAHHAJ, this (accusing) finger is pointing at you, too!

CNN: People Of Color Should Not Wear Face Masks
April 7th, 2020 The Lid 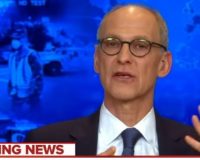