As we reported earlier, a conservative Turning Point USA (TPUSA) activist manning a recruiting table at UC Berkeley was captured on video being assaulted by what was described as a “leftist thug,” apparently for the doubleplus ungood thoughtcrime of holding conservative thoughts while on a liberal campus.

This prompted a “verified” Twitter user by the name of William LeGate to blame Charlie Kirk, the founder of TPUSA, for the assault.

“Charlie, I don’t condone violence, but let’s make one thing clear:  You didn’t go to UC Berkeley for ‘recruiting’… they’re one of the more liberal schools in the nation. You went there to incite.”

You didn't go to UC Berkeley for "recruiting"… they're one of the more liberal schools in the nation. You went there to incite. https://t.co/1rhLHLeVh0

Translation: It’s the victim’s fault for being assaulted.

He doesn’t condone violence except for those evil young people who don’t think like he wants them to so, of course, he thinks they should be silent and stick to areas where they won’t challenge the ridiculous groupthink that is suffocating the college system in this country.

And to show just how brave LeGate is, he went on a “blocking” spree, in an apparent effort to deflect criticism.  Apparently, he can dish it out, but can’t take it.

He blocked me. What he say?

Damn it I am blocked

We were curious to see what else was on his feed and perhaps find out a little bit about this individual and got this: 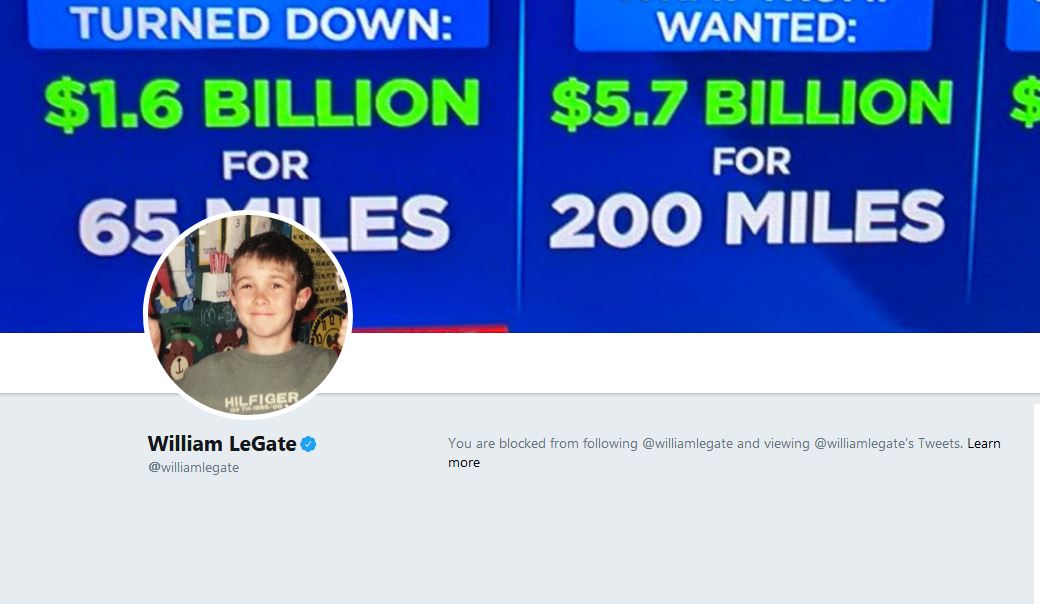 Mind you, I’ve never even heard of this person and have no idea why he would block us.

A search on Google revealed:

William LeGate is an American entrepreneur, Thiel Fellow, computer programmer and activist. A self-taught programmer from the age of 12, LeGate was brought to the public’s attention three years later when The New York Times recommended one of the iOS applications he had programmed during middle school.

A blog at Medium attributed to one William LeGate says, “I write about tech, startups, higher education, politics, design, & more…”

We’re not completely certain if this is the same person who issued the aforementioned Tweet, but found a Google entry that indicates it is very likely the same person:

Clicking on the link took us to the blocked Twitter feed…

Liberalism, as I’ve said repeatedly since February 2011, is an ideology of insane rage and hate.  Sadly, leftists prove that assertion correct on just about any given day.

We can’t help but wonder:

What say you?  Let us know what you think in our poll, here.

Man Trying to Walk on Water Washes Up on Beach in Bubble-Like Vessel, Police Say
July 26th, 2021 Flag And Cross