During yesterday’s Coronavirus briefing, a reporter asked Trump if he knew about the Biden tweet that “attacked” him. Of course the media claimed that Trump’s humorous response was an attack on the Biden campaign, and the headlines read that he “slammed” Biden. Not really. It was Trump humor, and pretty funny at that. 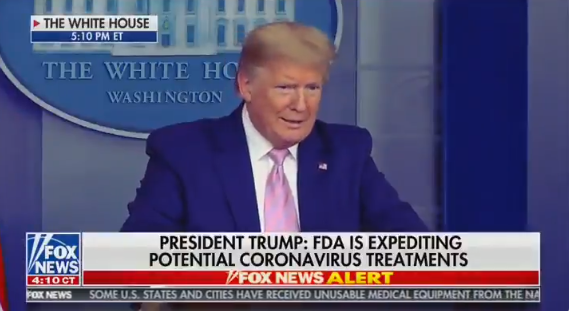 Remember when Obama told the business owner that he “didn’t build that?” Remember all the gaffes that Joe Biden has been throwing indiscriminately around the country? You know, the ones that make him sound like a runaway from a  mental facility? Those. Trump came up with one better, all on the spur of the moment.

Earlier in the briefing, according to the Post-Millennial, the President mentioned:

“But I appreciated the fact that Joe Biden announced last night that he now agrees I was correct when I stopped people from China coming in at a very early date.”

The reporter asked the President if he knew about the tweet that “attacked” him.

Reporter tells @realDonaldTrump that Biden attacked him in a tweet.

President Trump: "He didn't write that…he's probably not even watching right now. And if he is, he doesn't understand what he is watching." pic.twitter.com/dhRsnSmDZU

The humor of it was totally lost on journalists (no surprise there). They were too busy telling the country that ‘Orange Man Bad’ was once again being mean.

Neither remark was an actual “attack” on the other. The definition of attack is extremely skewed in today’s news world. It’s just politics as usual on Biden’s part. But with all that has been said and written about the former Vice President over his mental decline, Trump’s response to the question was hilarious. Well done, Mr. President!