When he was President, Trump repeatedly vowed that “America will never be a socialist country.”  That was a nice thought, but it was wrong.

America had been sliding toward Socialism for over a century. It sped up during the Obama administration and accelerated even faster under Biden.

The basic concept of Socialism is that the government controls the means of production, distribution, and selling. Socialism requires a colossal government to control both the government and the economy. Another reason a large government is required to create the society a government desires.

Socialism demands public rather than private ownership or control of the property. Society represented by the government owns or at least controls property for the benefit of all its members. Socialism takes away individual freedom. Therefore in existing society, it has to be executed slowly to avoid the shock of this significant change.

Truth be told, the socialist philosophy and the elimination of our individual freedoms are espoused by many in today’s Democratic Party. But that is the Socialism attacking America’s freedoms started a century ago. For most of that century, the Socialist/  movement was surreptitiously trying to take over America.

A critical tenet of Socialism is collectivism, which is antithetical to the version of democracy practiced in the American republic since the Constitution was enacted. The US version of democracy insists that (with some exceptions)  individual rights are superior to the government’s rights or the rights of the collective. In 1887, three decades before he became president Woodrow Wilson published an essay to fool the American public about Socialism.

One of the essay’s most famous passages was:

“It is very clear that in fundamental theory socialism and democracy are almost if not quite one and the same.  They both rest upon the absolute right of the community to determine its own destiny and that of its members.  Men as communities are supreme over men as individuals.”

Today, Wilson’s political descendants present the false concept that Socialism is the best way of attaining equality. The Socialists believe equality requires control of the goods and services that provide the basis for prosperity in any society. American capitalism believes equality means everyone should have the same opportunity to succeed.

“The Constitution was founded on the law of gravitation. The trouble with the theory is that government is not a machine, but a living thing.”

A “living” constitution was a favorite concept of Barack Obama and is popular with the Democratic Party today.

Abraham Lincoln once said, “The philosophy of the schoolroom in one generation will be the philosophy of government in the next.” Socialism’s believers listened to honest Abe.

John Dewey, a progressive leader, was crowned “the father of American Education,” some even call him the best educator ever lived.

During the late 19th and first half of the 20th century, Dewey aimed to make school a tool for leftist-progressive social engineering. And that was before today’s leftist teachers’ unions.

Dewey advocated conveyor belt education—training a conditioned response in students to better conform to the “one, ultimate, ethical ideal of humanity, thus making them more equipped for their future workforce and wokeness.”

Dewey was a critic of laissez-faire liberalism and its accompanying individualistic view of society from his early writings. This criticism was amplified during the Depression, where he expressed a form of liberal and democratic socialism in writings such as—Individualism, Old and New(1930), Liberalism and Social Action (1935), and Freedom and Culture (1939).

Anyone with kids in public schools and universities knows that Dewey’s philosophy has been adopted.

In 1945  F.A. Hayek saw what was being taught and implemented in free democracies and issued a warning via his classic tome, “The Road to Serfdom.” As Richard McKenzie Neal explained:

Hayek argued that Western democracies, including the United Kingdom and the United States, have “progressively abandoned that freedom in economic affairs without which personal and political freedom has never existed in the past. Society has mistakenly tried to ensure continuing prosperity by centralized planning, which inevitably leads to totalitarianism. We have in effect undertaken to dispense with the forces which produced unforeseen results and to replace the impersonal and anonymous mechanism of the market by collective and ‘conscious’ direction of all social forces to deliberately chosen goals. Socialism, while presented as a means of assuring equality, does so through “restraint and servitude”, while “democracy seeks equality in liberty”

Educators have moved America’s youth away from individualism and independent thinking into collective zombies for decades. The only way to be successful in school was (and is) to adopt the teacher’s socialist-type philosophy. Those teachings are echoed in today’s progressive/socialist street protests under the banners of resistance, wokism, “white privilege,” and more. Even the socialist doctrine of international income redistribution, cloaked as the climate change movement, began to be accepted in public schools. –

This may be behind the appeal of Bernie Sanders to Millenials. In some ways, he looks and sounds like the college professors who indoctrinate them into Socialism.

Aside from Dewey and academia, political players have been trying to convince Americans about Socialism. A 1970 New York Magazine piece by economist and adviser to JFK [and Bubba Clinton Presidental Medal of Freedom honoree]  John Kenneth Galbraith wrote, “Richard Nixon and the Great Socialist Revival.” At the time, Nixon was a very popular president, and Galbraith (who spent a lifetime working for advanced progressivism and social justice) implied that if Nixon liked socialist programs, so he couldn’t be too bad.

“It is a known fact that the policies of the government today, whether Republican or Democrat are closer to the 1932 platform of the Communist Party than they are to either of their own party platforms in that critical year.”

A year later, Trohan wrote that it might be too late as the only difference between the two parties was that the GOP slid toward Socialism a bit slower:

Conservatives should be realistic enough to recognize that this country is going deeper into socialism and will see expansion of federal power, whether Republicans or Democrats are in power. The only comfort they may have is that the pace will be slower under Richard Nixon that it might have been under Hubert H. Humphrey.

After the socialist-type programs of FDR, America reacted with the conservative Eisenhower. While communism was an external threat through the 1960s, it was sold as a military threat and ignored the danger of internal moves toward a progressive/socialist loss of individual rights.

Galbraith and Trohan were correct in saying that Nixon was not a conservative. His creation of the Office of Management and Budget, the Environmental Protection Agency, and price controls are just a few examples of his rejection of Hayek and his belief that centralized, big government took precedence over individual liberty. Even the Watergate scandal was an example of the view that the government took precedence over individual free thinking.

The socialist slide continued with Jimmy Carter before the public stopped the slide by electing Ronald Reagan. Reagan’s surprising election and the popularity of his presidency were based on his belief in the power and wisdom of the individual American vs. the collectivization of progressive/socialist government. Some of his most famous quotes reflect that philosophy. Such as “In this present crisis, the government is not the solution to our problem; government is the problem,” or the oft-quoted nine most dangerous words in the American language. “I’m from the government, and I’m here to help.” Reagan’s signature tax cut program took away wealth from the collective government and restored it to individual voters.

Reagan’s drive to restore Americans’ belief in the individual and stop the slide towards Socialism turned around a horrible economy but was met with fake claims of racism and warmongering from the press (it was all MSM back then) and the Democrats.

After two terms of The Gipper, the slide returned with the election of Bush #41. Under Obama, the “slide” became a gallop.

As with the election of Ronald Reagan, Donald Trump’s 2016 victory was a voter reaction to the move away from America’s individualism. His themes of “Make America Great Again” and “America First”  helped make Americans free again. More importantly, his redesign of the economy—deregulation and tax reduction- returned to an America that empowered the individual. Unfortunately, Trump’s nastiness and a global pandemic prevented the continuation of his economic programs.

As they did with Reagan, the supporters of progressivism/socialism, including part of the federal bureaucracy and much of the media, attacked Trump with false charges of racism/white supremacy and warmongering. But Trump didn’t help himself with the nasty way he addressed people who disagreed with his policies or personality. Trump’s mean tweets gave the socialists a weapon against his successful small-government policies.

Trump’s successor Joe Biden is another believer in socialist policies. He attacks with venom anyone who disagrees with political positions. He also refuses to recognize the First Amendment and politicizes law enforcement to guarantee his policies. Biden’s programs are an instrument to destroy personal freedom. Programs such as COVID restrictions, removal of fossil fuels, growing government spending to cause a spike in inflation, restrict the staple products families can buy, and so much more.

A reason for those moves is to make the lives of Americans so dreadful that they demand a change of government. Thankfully it doesn’t look like that will happen now. Despite Biden’s despotic view that individual rights should be crushed.

What of our future? Will future socialist-leaning presidents find a way to continue the century-long slide toward Socialism? Socialist practitioners never explain what they are selling. They call it progressivism or liberalism, but they are selling voters policies that take away our individual freedoms, our healthcare decisions, and our faith and push programs that will take away our freedoms. For example, the green energy plan restricts what we can eat (cows), how we travel (planes), and even how we keep ourselves warm (fossil fuels).

Americans must be vigilant about what comes next. The mid-terms are in less than two months. The people must elect candidates who will have a “no holds barred” battle against the freedom-stealing socialist movement. If you have a Rep. or Senator incumbent who is weak in the anti-socialist fight, vote against them.

In the end, it is up to the voters. Do we become complacent and forget how presidents like Reagan and Trump stopped the slide? If we fail to elect the right people in the 2022 midterm, it may be too late because afterward, our freedoms will be too far gone.

America will never be destroyed from the outside. If we falter and lose our freedoms, it will be because we destroyed ourselves. 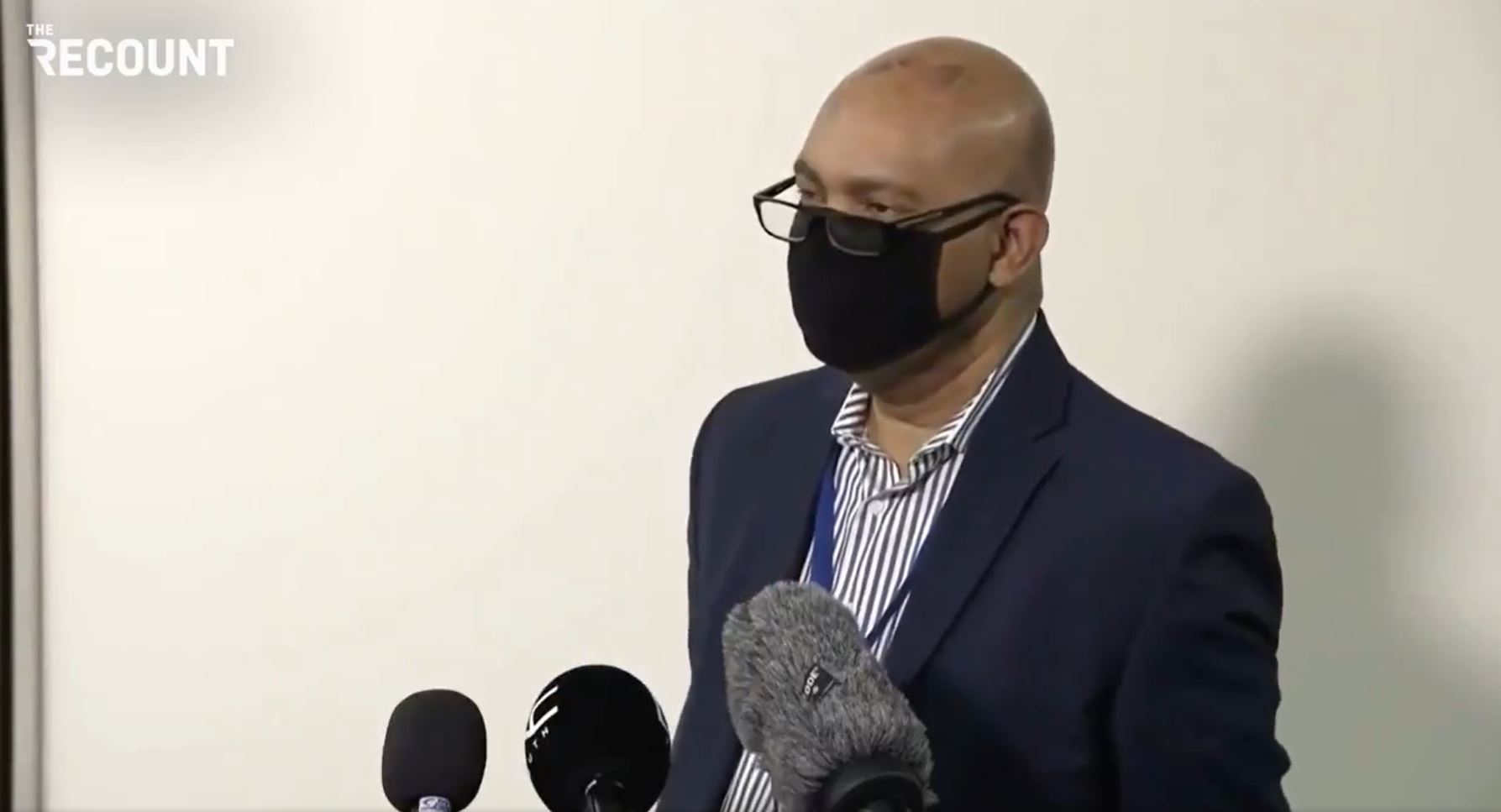