Berkeley Antifa thugs were filmed vandalizing a US Marine Corps Recruiting station on Shattuck Avenue during Sunday’s “protests.” The man who filmed the incident, Ford Fischer, was told to “Get the fuck back. Cops aren’t here. They won’t help you.” 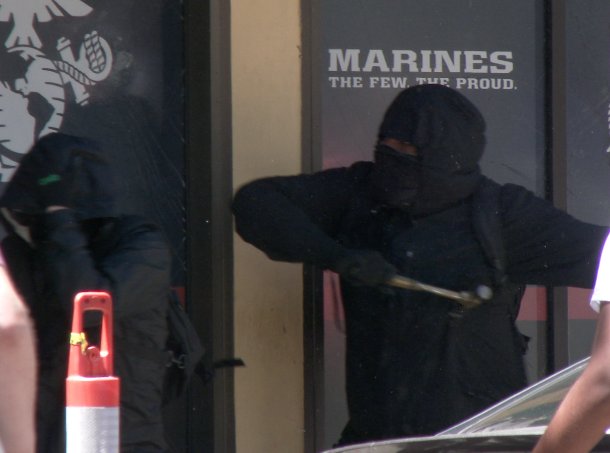 Too bad a group of Marines weren’t present on Sunday, the vandals would have been in a world of hurt.

“Antifa closed out the day in Berkeley with 20 arrests by smashing the windows out of a Marine Corps Recruiting Office and by threatening to beat up the livestreamer Ford Fischer.”https://t.co/1F8hy2cacX

The following is typical of the mainstream media: they only want to cover the violence and nothing else.

Worth noting that there’s still a fairly upbeat left-wing group of at least a couple hundred on the streets of #Berkeley, and media seems to mostly be ignoring them since there’s no violence to watch. pic.twitter.com/edhgVOFm1b

The media all went home/to the office to file after the right wing left, but many on the left stayed out in a march complete with drummers. Check out my raw video from that, including @kittystryker interview.

It’s been reported that a few were arrested after I left as well. pic.twitter.com/dNkCoFLUC9

Police attempted to ban people from wearing “masks, scarves or bandannas or anything covering their faces except for religious or medical reasons.” But videos taken of the demonstrations, however, showed numerous people, primarily Antifa, who were wearing masks, as in Mr. Fischer’s video above. The “Black Bloc” deliberately wears clothing that covers their faces to make it difficult to prosecute them.

As of our writing yesterday evening, 20 arrests had been made.

Here is Mr. Fischer’s YouTube video of the protests.

Ford Fischer is the co-founder and editor in chief of N2SReports (News to Share). His coverage of the clashes from Portland to Berkeley were posted on Twitter. He is scheduled to be on Fox News tonight at 7:45 pm EDT.

Biden is proving even more of a ‘master of disaster’ than Jimmy Carter
May 16th, 2021 Liberty Unyielding

How Do You Leave God Out of Prayer?
May 16th, 2021 TCP News
Tweets by Conservative Firing Line