Jonathan Hancock is a US Marine Combat Veteran who was deployed with the 2nd Battalion, 4th Marines. Their nickname is ‘The Magnificent Bastards.’ Which is why he calls his documentary film Bastard’s Road. But it has been a journey, a journey from tough Marine to nearly destroyed, and back again to a solid future. 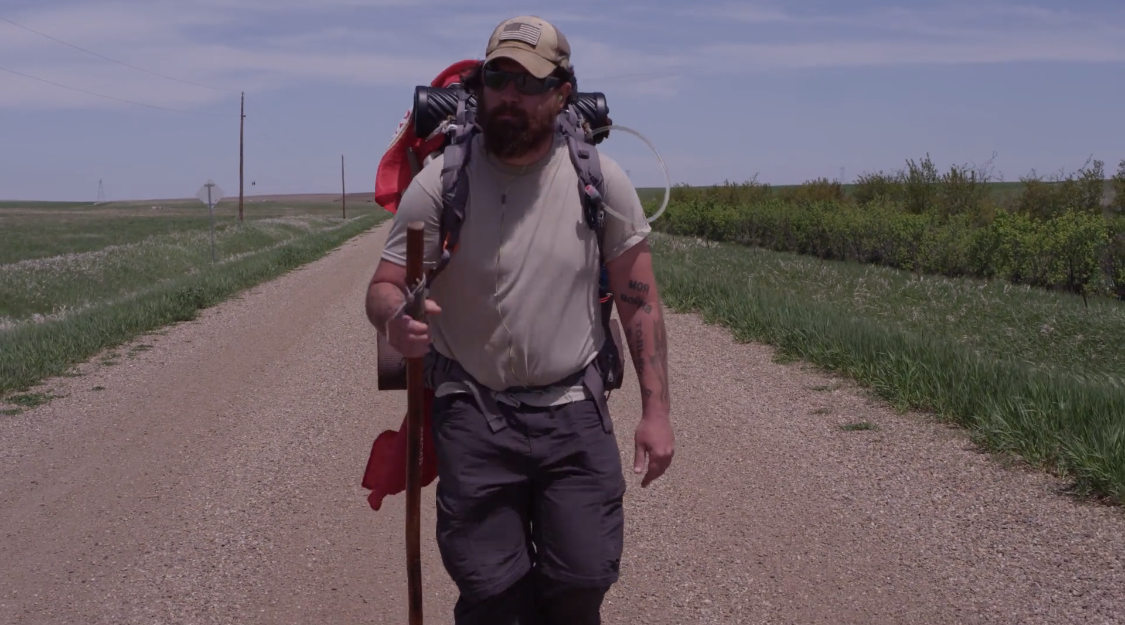 The 2/4 has the sad distinction of having the heaviest losses of any unit in the Iraq War. He was part of the Marine companies that fought the Battle for Ramadi in 2004. The 2/4 went into Ramadi thinking the war was almost over. They were wrong. A series of coordinated ambushes took out many of the Marines.

“It went sideways on April 6… We came under attack from everywhere. We lost 35 Marines, and about 100 were wounded or lost something.”

Eventually they were able to break the momentum of the insurgents and kill about 250 fighters. But there are things that no one can forget, images that never leave…they are the ghosts of war with which all combat veterans must deal.

He got out of the Marine Corps on September 21, 2009.  From the time he came home until he went on his walk-about, he began a downward spiral. Though he had enrolled in college, he started drinking, got into fights,and started to skip classes.

“I became a bar stool warrior.”

He was arrested for DUI in 2012, and another in 2013 while still on probation for the first one. “The policeman took me home instead of to jail. I don’t know why.”

One day he decided to end his life and took a “bunch of pills.” He ended up at the Baltimore VA Emergency Room for four days.

When he was released, he watched another person walk across the United States on TV and it inspired him. He says at that moment, he had an “epiphany.” Jonathan likes to walk, and the journey began. He realized he was 308 pounds, out of shape, and a mess. So he started the process of building himself back up by riding a bike for 3 months and eventually, the walk across the US. It was a process, but he succeeded.

On September 11, 2015,  Jonathan began the 6,000 mile walk across the United States. Brian Morrison, a former classmate from high school, wanted to film him…and Bastard’s Road was born.  It took him 1 year, 3 months, and 1 day, ending on December 12, 2016 in San Mateo, California.

Jonathan’s film reminds us that there is a huge cost to war.  His mission on the walk was ” … meet with the Marine brothers I served with in the battle of Ramadi and meet Gold Star families of our fallen.”

The movie reaches into their thoughts, their hearts, and shows the bottom line…coming home is the beginning of the battle, not the end.

Jonathan can speak fluent Arabic, and is actively learning Russian. He is once again enrolled in college and this time he will succeed in his goal. We wish him well.

You can listen to more of his stories and the journey to assimilation on the Tank Show Video below.

Jonathan has a message for all combat veterans:

“Bastard’s Road is a good capture of what we went through both during and after deployment. It shows how I almost destroyed myself before building myself up again. Everyone needs to find a healing endeavor. Mine was walking long distances. When you find that one thing, hold on to it, pursue it.”

Here is the trailer for Bastard’s Road- it has been submitted to the Sundance Film Festival. We’ll let you know what happens.

Here is the podcast from the interview with Uncle Sam’s Misguided Children:

How to make sure the 2020 election never happens again
December 5th, 2020 Liberty Unyielding

Fats: The Good, The Bad & The Ugly & The New Vaccines With Kate Shemirani
December 5th, 2020 Sons of Liberty Media