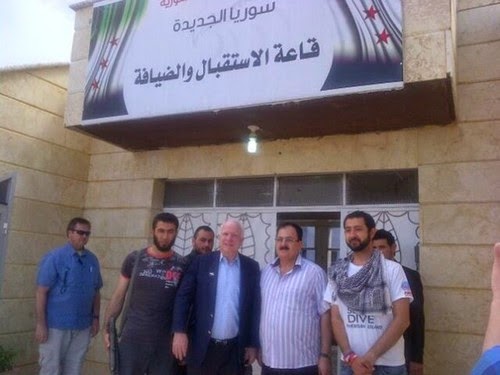 Just when you thought it couldn’t get any worse in the Middle East…just when you thought hell had already broken loose…in sashays Barack HUSSEIN Obama…a muslim and what I call an ‘armchair terrorist’ in his own right…who had the audacity to now ask Congress for $500 million to help “train and equip appropriately vetted elements of the moderate Syrian armed opposition.”

Wanting…as he says…“to empower the moderate Syrian opposition,” what this man does NOT get or gets but does NOT give a damn about is that the Syrian opposition are themselves terrorists as they get funding, weapons, and support from al-Qaeda…and that ISIS…whose base of operations into Iraq is from Syria…is a direct offshoot of al-Qaeda.

In other words Barack HUSSEIN Obama has now in-our-face taken sides on America’s behalf…without ‘We the People’s’ permission I might add…in a sovereign nation’s civil war and done so on the side of the ‘so-called’ moderate Syrian rebels. But what he can’t get through his thick skull is that there is NO such thing as a moderate terrorist…oops I mean rebel…and know that these rebels are indeed terrorists but terrorists who love to pose with American politicians to show that even terrorists can smile for the cameras before they take a knife to your throat.

So as the saying goes, ‘one hand washes the other’ and Obama’s hands are the dirtiest of all as he’s had and still has direct contact with these anything but moderate rebels. And with his having already chosen sides for America, Obama fails to understand that as bad as al-Assad is he is still better than those out to remove him from office.

And with the Senate Armed Services Committee already having approved a version of the defense policy bill authorizing the Defense Department to provide ‘equipment, supplies, training, and defense services’ to elements of the Syrian opposition that have been screened…gee I wonder by who as it has NOT been made public which ‘supposed’ moderate Syrian rebels they intend to train and support. And with Obama now wanting $500 million out of the $1.5 billion package targeted for what he calls a ‘regional stabilization initiative’ involving his muslim brethren in Jordan, Lebanon, Turkey, and Iraq…Obama again does NOT care that he’s supporting…that he has America supporting…the badder of the two bad guys.

So by his funding these anything but moderate rebels, Obama is actually helping to fund and equip ISIS, because ISIS has many members working amongst these ‘moderate rebels’. And ISIS is the most brutal of the brutal whose focused goal is to establish an islamic caliphate in the region one head at a time if need be, and who right now has overrun major portions of Iraq along with surrounding Baghdad on three sides. 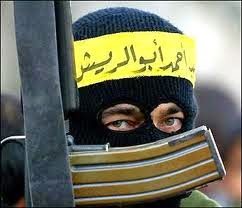 And as ISIS slowly completes its choke hold on Baghdad, having major area’s north and west of the city already under their control, they’ve now reached the town of Mansouriyat al-Jabalthat’s which is just an hour from the outskirts of Baghdad city proper…a town that’s home to four natural gas fields, and that folks is NOT good at all. And with al-Qaeda proper having begun to merge with both ISIS forces and troops from the al-Nusra front…and with ISIS now controlling all key border crossings on the Iraqi side of the Syrian border along with their taking of U.S. made weapons from retreating Iraqi forces…you just know Iraq could soon fall. And if Iraq falls could Syria…especially its eastern portions…or Afghanistan be far behind.

Can that scenario really happen…YES it can…as Obama wants our Congress to help fund and arm these bast*rds to help expedite the process of establishing his oh-so-wanted islamic caliphate post haste. And to speed up that process the funding of the so-called ‘moderate rebels’ fits into his plan quite nicely. After all, since he physically can’t join in the battle…NOT that this wimp in presidential clothing would ever have the courage to pick up a gun and fight…what Obama feels he can at least do is fund and side with those out to kill us all…that is all of us who unlike him do NOT straddle the ground with our butts in the air pointing east.

But even with things in Iraq looking their bleakest right now one glimmer of hope did surface…a glimmer that could have American blood spilled and treasure spent maybe NOT being in vein…a glimmer that NO thanks to Obama had Iraqi forces… American trained Iraqi forces…launching an airborne assault on Saddam Hussein’s hometown and now rebel-held city of Tikrit, as they landed three helicopters with commandos in a stadium for a counter-attack against the ISIS forces…and they successfully held them back.

And so as Obama now escalates the U.S. role in the Middle East in Syria by his choosing sides with the ‘supposed’ vetting and then funding rebel fighters (but hopefully he’ll do so with Congressional approval and without us actually funding islamic extremists and terrorists as the militant and moderate rebels seem to have merged and morphed into one cohesive force) this man has now inserted America into Syria’s civil war.

And with his sending 300 military advisers into Iraq to help ‘advise’ the government forces on how to deal with ISIS and to help train them in that dealing, Obama has inserted us back into the Iraq conflict after his having pulled us out two years ago. And with said pull-out that should have meant the U.S. involvement in the Iraq war theater was over…involvement in a country that now thanks to ISIS has little if any effective national borders left. Yet by doing what he’s doing with the military advisers along with his having drones flying overhead…isn’t he getting us again involved in a war without a ‘Declaration of War’ from Congress…just something to think about…just something to fear.

Adina Kutnicki - April 9, 2020
IF law and order is to be respected within America — as well as the wider civilized world — let there be no doubt:...

CNN: People Of Color Should Not Wear Face Masks
April 7th, 2020 The Lid