On Friday, the New York Times slimed U.N. Ambassador Nikki Haley with a story about expensive curtains being installed in her temporary residence, only stating further in the story that the curtains were purchased during the Obama administration.  Naturally, leftists fell for the story, hook, line and sinker.  Among those who fell for it and pushed a false narrative was David Hogg, the far-left anti-gun teen demagogue once dubbed the “king of the snowflakes” on Twitter.

“Dear Nikki Haley,” he wrote. “There are starving children in America everyday and you have the audacity to misappropriate thousands of tax dollars for your own lavish lifestyle. Resign immediately sincerely, America,” he tweeted.

Apparently, Hogg never read the article, which originally stated in the fourth paragraph:

A spokesman for Ms. Haley said plans to buy the curtains were made in 2016, during the Obama administration. Ms. Haley had no say in the purchase, he said.

We also grabbed a screenshot of that paragraph:

Which means that neither Haley nor the Trump administration had anything to do with the purchase.  But that doesn’t really matter to leftists like Hogg.

Response on the social media outlet was fairly predictable:

This decision was made under the Obama administration for her to live there, dummy. This wasn’t even her decision

An editor’s note placed at the top of the article reads:

An earlier version of this article and headline created an unfair impression about who was responsible for the purchase in question. While Nikki R. Haley is the current ambassador to the United Nations, the decision on leasing the ambassador’s residence and purchasing the curtains was made during the Obama administration, according to current and former officials. The article should not have focused on Ms. Haley, nor should a picture of her have been used. The article and headline have now been edited to reflect those concerns, and the picture has been removed.

And that fourth paragraph now reads:

The current ambassador, Nikki R. Haley, is the first to live in the new residence, which has spectacular views. But a spokesman for Ms. Haley emphasized that plans to buy the mechanized curtains were made in 2016, during the Obama administration. Ms. Haley had no say in the purchase, he said.

But wait…  Doesn’t the Times have editors whose job it is to catch such things before they’re printed?

But, to paraphrase Hillary Clinton, what difference, at this point, does it make?  The damage has already been done.

Exit question: Will Facebook penalize the New York Times for this?

Update: Hogg’s tweet was removed shortly after this article was published, but not before it was archived for posterity…  A screenshot of that tweet can be seen below: 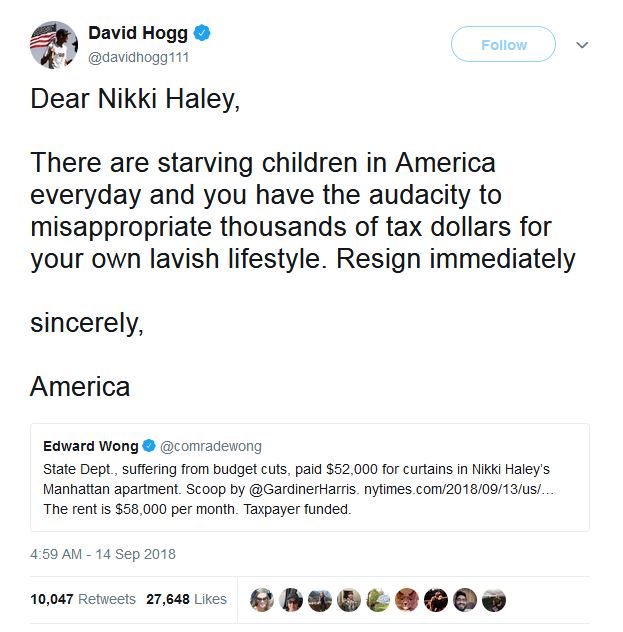 Another Criminal Politician Exposed Again (Video): Americans Taking Heed To Them That Do Not Even Believe In Their Own Lies!
November 26th, 2020 Sons of Liberty Media