“We have not faced the prospect of Armageddon since Kennedy and the Cuban Missile Crisis.  We’ve got a guy I know fairly well; his name is Vladimir Putin.  I spent a fair amount of time with him.  He is not joking when he talks about the potential use of tactical and nuclear weapons…”

That was President Joe Biden noting that the war in Ukraine could go nuclear at a Democratic Senatorial Campaign Committee fundraiser on Oct. 6, citing Russian President Vladimir Putin’s threats to use nuclear weapons in the war as Moscow has warned against NATO expansion towards its borders, including Ukraine, which recently applied for fast-track NATO membership after Russia annexed Donetsk, Luhansk and other cities and towns throughout the Donbas region.

The speech also referenced a pursuit of an “off-ramp” indicating a desire for de-escalation in Washington, D.C., stating, “we’re trying to figure out: What — what is Putin’s off-ramp?  Where — where does he get off?  Where does he find a way out?  Where does he find himself in a position that he does not not only lose face, but lose significant power within Russia?”

The speech was apparently in response to Putin’s Sept. 30 speech where he announced the annexations and offered a ceasefire, stating, “We call on the Kiev regime to immediately cease fire and all hostilities; to end the war it unleashed back in 2014 and return to the negotiating table. We are ready for this, as we have said more than once. the choice of the people in Donetsk, Lugansk, Zaporozhye and Kherson will not be discussed. The decision has been made, and Russia will not betray it. Kiev’s current authorities should respect this free expression of the people’s will; there is no other way. This is the only way to peace. We will defend our land with all the forces and resources we have, and we will do everything we can to ensure the safety of our people.”

While the prospect of nuclear war is very alarming — Biden, Putin and Ukrainian President Volodymyr Zelensky have all cited the possibility of nuclear war in the last few weeks — it has been a clear and ever-present danger throughout the Cold War since nuclear weapons were proliferated globally in the 1940s as what the Allies achieved in the Manhattan Project’s first atomic bombs dropped on Hiroshima and Nagasaki was also being pursued by Nazi Germany, and then again in 1949 when they reached the Soviet Union.

Various incidents that could very well have sparked war include the Cuban Missile Crisis in 1962 but also the 1983 near accidental nuclear war that almost occurred when the Soviet Union’s early warning system erroneously reported the U.S. had launched a single warhead at Russia. It turned out, it was a false alarm and was never acted upon.

Given the history and experience with near misses in the nuclear era, Presidents including Harry Truman, Dwight Eisenhower, John Kennedy, Lyndon Johnson, Richard Nixon, Jimmy Carter, Ronald Reagan, George H.W. Bush, Bill Clinton, George W. Bush, Barack Obama, Donald Trump and now Joe Biden have all occasionally spoken about the prospects of nuclear war when they needed to, including frequently invoking the term “Armageddon” itself, sometimes as an imminent danger, as in Cuba and Ukraine, and sometimes as something that seemed far away after Soviet Union had fallen — and, importantly, always as a nightmarish scenario that was best to be avoided by the great powers for the very sake of humanity itself.

Famous among these low-key statements by presidents was that of Truman after the Soviets tested their first weapon in 1949, simply to acknowledge its inevitability: “Ever since atomic energy was first released by man, the eventual development of this new force by other nations was to be expected. This probability has always been taken into account by us… no single nation could in fact have a monopoly of atomic weapons. This recent development emphasizes once again, if indeed such emphasis were needed, the necessity for that truly effective enforceable international control of atomic energy which this Government and the large majority of the members of the United Nations support.”

Harry Truman in his Farewell Address in 1953 said, “Starting an atomic war is totally unthinkable for rational men.”

Dwight Eisenhower in 1953 called for a turn away from the militarization of nuclear capabilities and introduced the “language of atomic warfare”: “I feel impelled to speak today in a language that in a sense is new, one which I, who have spent so much of my life in the military profession, would have preferred never to use. That new language is the language of atomic warfare… In this quest, I know that we must not lack patience. I know that in a world divided, such as ours today, salvation cannot be attained by one dramatic act. I know that many steps will have to be taken over many months before the world can look at itself one day and truly realize that a new climate of mutually peaceful confidence is abroad in the world. But I know, above all else, that we must start to take these steps—now. The United States would seek more than a mere reduction or elimination of atomic materials for military purposes. It is not enough to take this weapon out of the hands of the soldiers. It must be put into the hands of those who will know how to strip its military casing and adapt it to the arts of peace. The United States knows that if the fearful trend of atomic military build-up can be reversed, this greatest of destructive forces can be developed into a great boon, for the benefit of all mankind.”

In 1960, then-Vice President Nixon—who would eventually sign the first Strategic Arms Limitations Treaty (SALT) and the Anti-ballistic Missile Treaty in 1972 (ABM)—on the campaign trail against Kennedy, described the careful language presidents must use when discussing this topic in order to avert war, and spoke of winning the Cold War “without war,” stating, “I am convinced that we do have the strength, and we will develop more, to win this struggle and win it without war. But it is going to take leadership. It is going to take leadership which will be calm in the time of crisis, leadership which will be firm, but leadership which will not be belligerent. Because never must we indulge in the war of words which might heat up the international atmosphere to the point that a nuclear catastrophe would come to the whole world.” Here, Nixon was sagely advising for presidents not to get baited into verbal escalations.

In 1983, Reagan in an interview stated a nuclear war must never occur and called for reciprocal arms reductions by the U.S. and the Soviet Union: “there must not be a nuclear war, then maybe the people will understand why we’re trying so desperately to get a reduction in those weapons worldwide. And I hope that if we start down the reduction road that the other side will see the common sense in eliminating them totally.

In 1984, in a debate with Democratic presidential nominee Walter Mondale, Reagan declared, “A nuclear war cannot be won and must never be fought.”

The war without a war was generally the approach adopted by presidents going forward, with every president from Truman through Trump all averting global catastrophe by acknowledging that there were limits to what American power could achieve as it related to directly challenging other nuclear powers, even while stating the goal was to defeat communism, and instead ushered in an age of nuclear summitry, that for all its flaws and uneven progress, gave the nuclear powers a basis for adjudicating nuclear arms levels and eventually, reducing them for a time.

Begun by Kennedy and Nikita Khrushchev, who pulled missiles out of Turkey and Cuba to avert war, Nixon, who ushered in ABM (terminated by George W. Bush), SALT I and SALT II under Ford, and capitalized upon by Reagan and Mikhail Gorbachev, who signed the Intermediate Nuclear Forces Treaty (INF) in 1987, and by George H.W. Bush and Barack Obama who signed the Strategic Arms Reduction Treaties (START) in 1991 and 2010, respectively. Of those, the INF Treaty by Reagan and Gorbachev, recently terminated by Trump, was particularly effective at removing nuclear weapons from the continent of Europe in the 1980s, creating so much security it directly ushered in the end of the Cold War.

Now, NATO powers are requesting to once again introduce nuclear weapons to the continent in a bid to deter Russia. The old agreements have been frayed as the old leaders passed on, which predictably has become a pretext for more escalation. We’re in another such arms race today with the advent of hypersonic and other missile delivery systems. In many ways, we’re right back where we started.

Now, the current generation of leaders of the great powers is once again be called upon to either continue that escalation — the last such arms race lasted from 1945 all the way through 1987 — and/or to eventually step back from the brink.

To the extent that such denuclearization agreements and arrangements have been achieved at all, and to the extent Armageddon has been avoided thus far, it was through reciprocal negotiations that led to occasional breakthroughs. Biden mentioned “off-ramps” and so even at this late hour, those negotiations have never truly ended. The trick appears to be to avoid any more “on-ramps.” 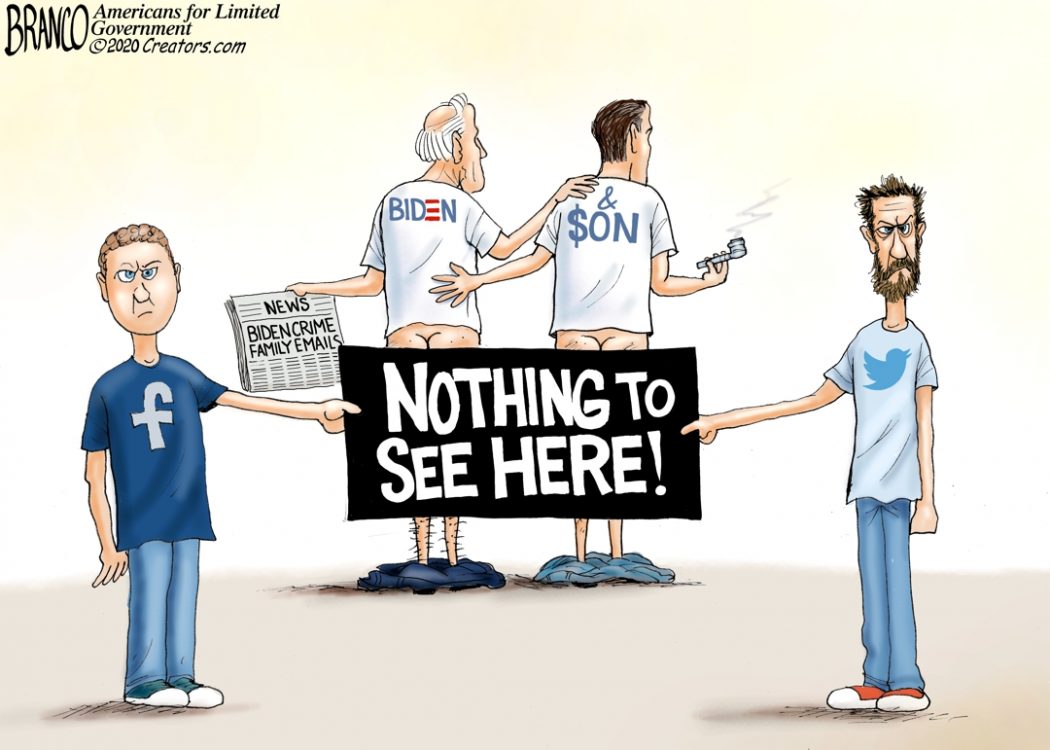 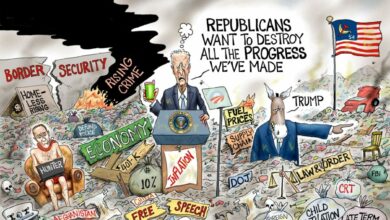 Cartoon of the Day: One Man’s Treasure 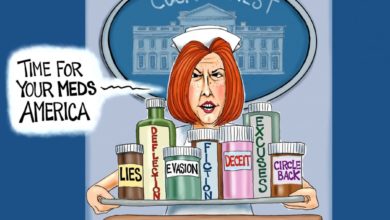 Cartoon of the Day: Nurse Ratchet