There has been a lot of talk lately about something called a “vaccine passport” that, if all the reports are to be believed, would eventually be required in order to travel or engage in commerce.

Conservatives have expressed concerns over it, but they’re not alone.  Naomi Wolf, a former Clinton adviser and CEO of a tech company, said Joe Biden should be prosecuted and impeached over it and warned that it would be the end of human liberty in the West.

“… I’m CEO of a tech company I understand what this platform does, it’s not about the vaccine, it’s not about the virus, it’s about your data, and once this rolls out you don’t have a choice about being part of the system, what people have to understand is that any other functionality can be loaded onto that platform, with no problem at all,” she said.

“And what that means is, it can be merged with your PayPal account with your digital currency, Microsoft is already talking about merging it with payment plans, your networks can be sucked up a geo locates you everywhere you go, your credit history can be included all of your medical history can be included. I am not overstating this, I can’t say it forcefully enough. This is literally the end of human liberty in the West,” she added.

Something about this sounds eerily familiar to me.  I took a look back at the Book of Revelation and found this:

The second beast was given power to give breath to the image of the first beast, so that the image could speak and cause all who refused to worship the image to be killed.

It also forced all people, great and small, rich and poor, free and slave, to receive a mark on their right hands or on their foreheads, so that they could not buy or sell unless they had the mark, which is the name of the beast or the number of its name.

Let me make this perfectly clear for the alleged “fact-checkers” out there who seem to have a problem understanding basic English.  I AM NOT claiming that vaccine passports ARE the biblical mark of the Beast.

I am, however, saying the similarities between the proposed “passports” and the mark described by the Apostle John in the book written somewhere at the end of the first century AD on the island of Patmos are more than just a bit… interesting.

Imagine having a digital “certificate” that one would have to carry simply to travel or make any purchase.  Such a “certificate” could be placed on a tiny chip that could easily be implanted under the skin.  The technology for that already exists, by the way.

And given the nation’s headlong rush to authoritarianism and tyranny, it would not surprise us one bit if the regime of His Lying Demented Fraudulence, Emperor Joe Biden I, made such a chip implant mandatory.  And of course, lying propagandists in the lying liberal media (like Joe Scarborough, for example) and Big Tech oligarchs in Silicon Valley would be more than happy to help the regime shame Americans into accepting the chip.

Naturally, anyone rejecting the chip would be castigated as a white supremacist, a racist, an idiot, a terrorist, a domestic extremist, or worse.  Who knows? Maybe Nicolle Wallace will suggest droning them out of existence. 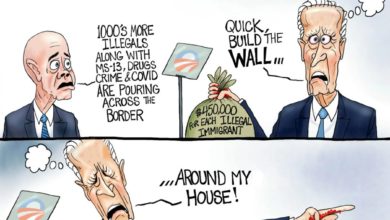 Cartoon of the Day: Overwhelmed