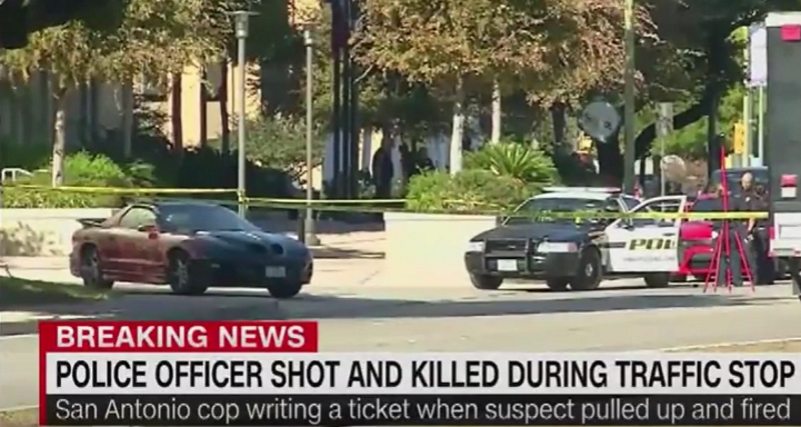 Breaking News: A black male shot a San Antonio police officer, with 20 years of public service, execution style, while the officer was sitting in his patrol car writing up a traffic ticket outside the San Antonio police Headquarters on Sunday.

The suspect, who fled the scene, has been described as a black male wearing a hoodie and baggy pants. He also has a beard and is approximately 5’7 and the motive is unclear.

In response, Texas Governor Greg Abbott, and U.S. Sen. Ted Cruz (R-Texas) issued statements of this senseless killing as the assaults and murders of police officers around the nation continue.

“Cecilia and I extend our deepest condolences to the victim’s family and harshly condemn this horrific act of violence, “said Abbott. “We ask that all Texans join us in praying for the officer’s loved ones as they deal with the aftermath of this unimaginable tragedy. Attacks against law enforcement officers will not be tolerated in Texas and must be met with swift justice, which is why I look forward to signing my Police Protection Act into law – making targeted attacks against law enforcement a hate crime.”

U.S. Sen. Ted Cruz (R-Texas) said, “Our prayers go out to the family of Detective Benjamin Marconi, who was shot and killed today during a routine traffic stop outside of the San Antonio police headquarters. To the San Antonio Police Department and law enforcement officers all across the State of Texas, our message is clear: we stand unequivocally with you, and we will not tolerate those who viciously and deliberately target law enforcement.”

Stimulus Checks Will Go to Criminals & Illegals After Dems Reject GOP Attempt to Stop It
March 6th, 2021 Flag And Cross

False Flag Attackers: Can The Guilty Parties Please Stand-Up? These Are The One’s That Admitted It! (Video)
March 6th, 2021 Sons of Liberty Media
Tweets by Conservative Firing Line